For over a decade, the husband and wife team, The Grovers have been shooting high-end weddings locally in Southern California and beyond. Their work has been featured in top publications including Martha Stewart Weddings, Style Me Pretty, People Magazine, The Knot, US Weekly and many more. Their noteworthy editing style, and approach as hybrid, film & digital shooters has led them to be named one of the Top Weddings Photographers in the world by Harper’s Bazaar. Using their years of editing experience and their knowledge of film, they’ve been able to help other photographers achieve the same clean, cohesive, film inspired edits with Noble Presets, their signature editing formulas. 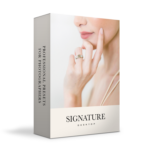 One thought on “Noble Presets”